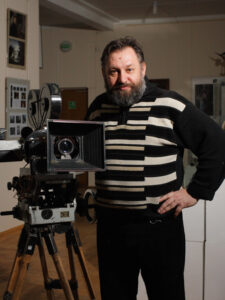 Film director, Associate Professor of the Department of “Film and Television Directing” of the Screen Arts Faculty of the Belarusian State Academy of Arts

Born in 1963, in Minsk.
After graduating from the Faculty of Architecture of the Belarusian Polytechnic Institute in 1985, he worked at the Animation Film Studio “Belarusfilm”.

1987-1989, Tumelya studied at the Higher Courses for Screenwriters and Film Directors at the department of animation film directing (Nazarov and Norshtein’s workshop).
1989-1999, he worked at the Minsk Studio “AF-Center” as a director of animation films. During the same period, Tumelya had contracts with animation studios in Moscow and Portland (USA).
1992-1993, he taught animation basics at courses at the “Troitsky Most” Studio (St. Petersburg).
For some time Tumelya worked on commercial serials at studios in Moscow, Budapest and Seoul.
1994-2005, Mikhail was the host of the popular children’s animation program “MultiClub” on Belarusian television.
2004-2006, he collaborated with the studio of Alexander Petrov (Yaroslavl) on the production of the film “My Love” as a co-writer and film director of some episodes.
2007-2012, Tumelya took part in the international project “Cheburashka” (Belarus-Korea-Russia-Japan).
2007-2008, he taught animation at courses in the studio of Alexander Petrov (Yaroslavl) and at the animation school “Laputa” (Tokyo).
In 2008, Tumelya conducted classes at preparatory courses for animators of the “Belarusfilm” Studio.
In the same year, he began teaching animation to students of the Belarusian State Academy of Arts (Minsk).

Collaborates with the Minsk Film Studio “Belarusfilm” as a screenwriter, artist, film director and animator. Participant and winner of many animation film festivals.