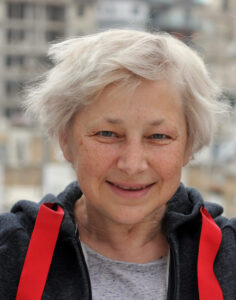 In 1983, Dina Goder graduated from the Lomonosov Institute of Fine Chemical Technology as chemical engineer-technologist. In 1988, she also graduated from the Russian Academy of Theater Arts (formerly GITIS) as theater critic.
From 1990 to 1994, Goder worked as the editor in the “The Theater” magazine. From 1996 to 2001, she was the head of the “Art” section and a theatrical observer in the “Itogi. Newsweek” magazine. From 2001 to 2003, Goder was the head of the “Art” section and a theatrical and animation observer in the “Ezhednevniy Zhurnal” magazine. From 2007 to 2011, she was a theatrical and animation observer in “Vremya Novostei”.
In 2011-2012, Goder held the same position in the “Moskovskie Novosti” newspaper.
From 2006 to 2010, she was an author and a host at the“Cartoons on weekends” club at the cultural center “Assembly Hall”.
From 2002 to the present day, Goder works as a curator and a teacher of the program of additional training for young journalists at the “School of Cultural Journalism” at the “Pro Arte” Foundation (St. Petersburg).
Since 2007 Goder is a Program Director of the Big Cartoon Festival (Moscow), and a member of the Expert Council at the Mikhail Prokhorov Initiative Fund.
Since 2015 she is an organizer of the educational project Animatorium (Tel Aviv, Israel).
Goder is an author of articles on theater and animation in Russian and foreign print media, on the Internet, on radio and television since the mid-80s.
Member of the jury and selection councils of various Russian and foreign theatrical (since the late 80s) and animation (since the 2000s) festivals.
Compiler of programs for Russian and foreign animation festivals.
Member of the jury and expert council (in 2011, 2012, 2019 – as a chairman) of the “Golden Mask” Russian national theater Award.
An author of the book: “Artists, Visionaries, Circus Performers: Essays on Visual Theater” (2012).