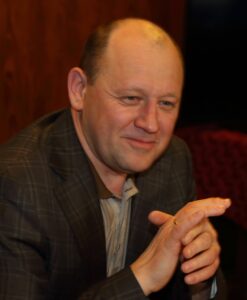 Education: Faculty of Journalism at the Lomonosov Moscow State University (1988-1993).

Gerasimov has been in animation since 1989. He took part in the organization of the International Festival of Animated Films “KROK” in 1989 and 1991.

In 1990-1991, Gerasimov collaborated with “The American-Soviet Film Initiative” by developing his own animation production.

From 1991 to 1994, he worked as deputy director of the Higher Courses for Screenwriters and Film Directors.

In 1993, with the initiative of the known masters of Russian animation Fyodor Khitruk, Yuri Norshtein, Andrey Khrzhanovsky and Eduard Nazarov, Gerasimov registered the School-studio of Animated Films “SHAR”, where he worked as its director for ten years.

In 1996, the Open Russian Festival of Animated Films was held in Tarusa for the first time.

Since 2002 the festival has been held in Suzdal. From the first festival to the present, Gerasimov has been the permanent director of this largest professional animation forum in Russia.

In 1997, Gerasimov began to work as a producer at the newly created “Master-Film” Company.

The main activity of the holding is the production of audiovisual content: animated short and feature films and series; fiction films; documentaries.

Gerasimov is a producer of more than three hundred animation projects, including two full-length cartoons, about twenty animated series, almanacs and collections, four full-length feature films of young debutants and more than one hundred documentaries.

Since 2013 he has been managing his workshop at VGIK in “multimedia producer” specialty.