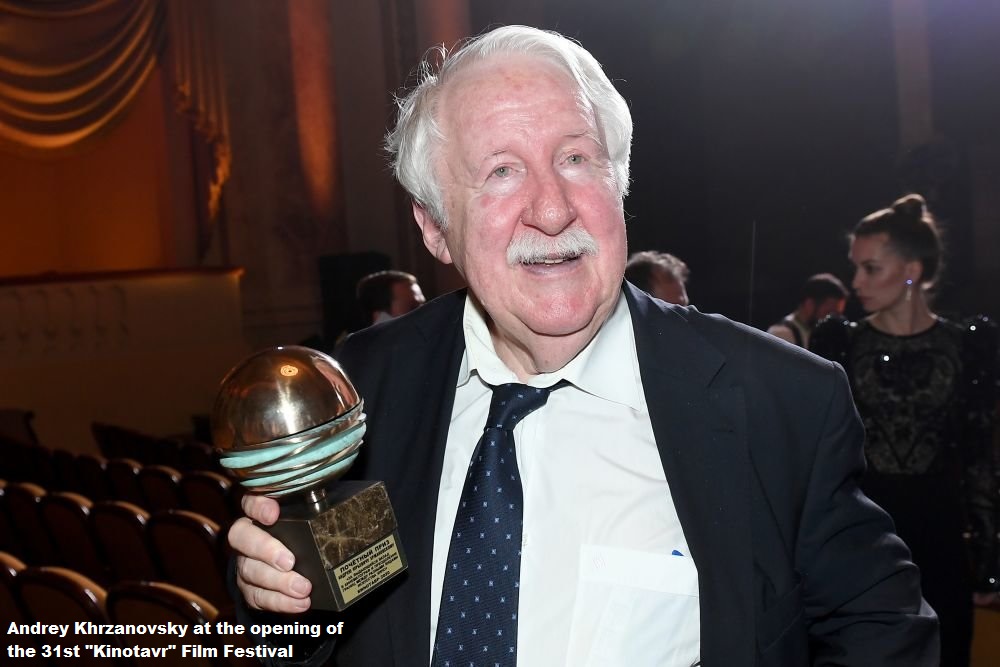 “Rossiyskaya Gazeta”, from 07.12.2020.
Text author: Svetlana Mazurova (Arkhangelsk region)
At the IV International Arctic Film Festival Arctic Open in Arkhangelsk a creative meeting took place with the classic animator Andrey Khrzhanovsky. It was held online. The audience was in the cinema hall, the director – at his home in Moscow, answering questions live.


Andrey Yuryevich you have realized yourself in different areas of cinematography – documentary, fiction, short and feature films, but you have always remained faithful to animation. Why?

Andrey Khrzhanovsky: Animation is a world of absolute freedom of imagination. As Fellini said “the ability to imagine is the highest way of thinking and the highest ability that is given to a human”. I can boast that at the “Kinotavr” Film festival, which was opened with my new film “The Nose or the Conspiracy of Mavericks”, I was awarded a special prize for “An outstanding contribution to cinema and overcoming the boundaries between different types of cinema art”. Then I said that the boundaries between types of cinema are more transparent than the boundaries between countries. Animation and cinematography attract me by the inexhaustibility of their possibilities.

What animated film did you miss as a child?

Andrey Khrzhanovsky: My father worked at the “Soyuzmultfilm” Studio. He dubbed more than a dozen films, and I had the opportunity to watch animated films. I can’t say that I missed something, or that some animation films were not enough for me. The first animated film I saw was “Snow White and the Seven Dwarfs”. I was probably 14 years old. But this is where my enthusiasm for animation ended. And the film that I was missing, I made myself: this is my work “Once upon a time there lived Kozyavin”. And I did all my films because I missed them.

I watched several of your films and each of them features Saint Petersburg. It’s easy to see your love for this city. What are your favorite places and what inspires you the most?

Andrey Khrzhanovsky: St. Petersburg is the city of my parents’ youth. Even now talking about St. Petersburg, it takes my breath away from delight how it was possible to invent and implement such a city… There are many favorite places: courtyards, houses, bridges, channels… If I begin to list all the places, I won’t be able to stop. Leo Tolstoy Square and the house of the architect Belogrud. There used to be a fish store, but I don’t know what is there now. My parents lived there, and I told everyone about it. We often visited St. Petersburg with Tonino Guerra, my beloved friend and co-author. When we passed my parents’ house for the first time, I told him about it. The next time we passed there, he was already leading the tour and said: “Dad, Andryusha’s mum!” And when we drove across the Troitsky Bridge overlooking The Spit of Vasilyevsky Island, he said: “Venice, be careful!”.

In your films you pay a lot of attention to cats. Do you like animals? Do you have a cat at home?

Andrey Khrzhanovsky: Unfortunately, we do not have animals at home. This is a loss of my life. But the circumstances were such that there wasn’t and still there isn’t such an opportunity. Ehrenburg said: “What is a dog’s life? It is when you can’t get a dog…”. I sympathize with cats. Maybe because according to my horoscope I am a cat.
The Meyerhold followers, in particular, Erast Garin, taught me the Stanislavsky’s idea that an actor should have a cat in the house, because it is the best teacher of grace, plastic and а great companion for observation.

Are you a happy person?

Andrey Khrzhanovsky: Yes. What is happiness? When there is a home, a family, a favorite job, when there is hope and a dream for loved ones to be close and that they are healthy. The same I wish to you with all my heart!

Does your son Ilya make you happy?

Andrey Khrzhanovsky: A lot. He makes me and my wife happy, and we are proud of him, and we listen to his advice. As Guerra used to say- a big man.

We also asked Andrey Khrzhanovsky about the School-studio of Animated Films “SHAR”, to which he devotes a lot of time.

Andrey Khrzhanovsky: “SHAR” is something I am truly proud of. First, we managed to found this community in 1993, and then to establish the Academy of Animation Art named after Fiodor Khitruk. We opened it this summer. The history of Russian animation began with Khitruk’s films. Why is “SHAR” so dear and interesting to me? I believe that nowadays, when all cinematography, and in particular animation, is turned towards commerce, our “SHAR” remains to be a unique story. Today a new film genre has appeared –“a pacifier”. This is when we put the child in front of the screen, press play – and we are free. And you know yourself what these babies are “fed” with. Try not to show these films to children. It is better to watch old animation films.

What other Russian regions have a chance to appear in one of your films? Can our Arkhangelsk region hope for it?

Andrey Khrzhanovsky: It depends a lot on you. You can open a branch of “SHAR” where you can learn the art of animation and open a film studio as well. It’s not that difficult, trust me. And you already have such magical material – tales, Shergin’s epics, Pisakhov’s… I think you have seen Nosyrev’s wonderful films on this festival. Send us ideas and we will help. The most important is to show initiative.

What books are you reading now? Which latest movies did you like?

Andrey Khrzhanovsky: Oh, if I describe a panorama of those books that I am reading now… I have such a bitter habit to read several books at the same time. For example, I am reading a very interesting book called “Notes on Experimental Music” by Alvin Lucier. Bunin’s volume with his essays on Tolstoy and Chekhov I read all the time. Books by Pushkin, Pasternak, Mandelstam are always on my bedside table. Mandelstam is one of my favorite poets. I also use his books as textbooks for communicating with students. “Dawn is breaking, the gardens lisp a green telegraph. Meanwhile Rembrandt is visited by Raphael”. What a miracle how he tells how the night turns into the morning. I think that Bella Akhmadulina wrote her great poem “Raphael’s Day” after reading Mandelstam’s lines. I will not list other books, because this will take long time.
From the last movies I saw I would point out “A Man from Podolsk”, a wonderful film that was at the “Kinotavr”. I know that this famous play is being performed in several theaters. Another amazing film “Scarecrow” was shot by a Yakut director with a wonderful actress. At the festival in Berlin I saw films by Ilya Khrzhanovsky. They made a great impression on me.
Recently I watched “City Lights”, probably for the 28th time. Chaplin’s “Circus” and Fellini’s “Amarcord”. All of them, I think, are unsurpassed masterpieces.

What is your favorite animated film?

Andrey Khrzhanovsky: None! I have a long list. I love all the Khitruk’s films. There are many masterpieces among foreign animation films which you probably have never seen. Together with my young friend Philipp Dzyadko, the leader of a wonderful institute called “Arzamas”, we are starting a project for a wide screening and discussion of animated films. Due to the current tendency of animation film box office, people do not have the opportunity to see such masterpieces as “Gagarin”, and it received the “Golden Palm” at the Cannes Film Festival. Or “Singing Teacher” by Petrov, a film of the “SHAR” Studio, which also received prizes on various festivals. And have you seen “Hamlet. Comedy”?.
I watch films of our students and graduates and think: “I couldn’t do that! Author animation is charming because it is unique”. I will be happy to discuss with you my and your favorite films.

Your love of life amazes! And of course love theme is present in your films. How does love itself fit into your life?

Andrey Khrzhanovsky: This is the sphere in which I exist. I believe that love is the basis of life and the basis of art. Whatever you make a movie about, it will be about love and made with love.

What is the secret of your youth?

Finally, the director was asked what questions he considers the best.

Andrey Khrzhanovsky: The best question is the one that hasn’t been asked yet. Can you see how I cheated? You will have the opportunity to extend your questionnaire and pass it on to me and we will continue our conversation. Happy to see you and thank you for your attention! Your opinions are very dear and interesting to me.

At the Arctic Open film festival there were shown Andrey Khrzhanovsky’s animated film “A Cat and a Half” (2003) and a feature film “A Room and a Half” (2008). Grigory Dityatkovsky, a theater director, who played the role of Brodsky in the film “A Room and a Half”, came from St. Petersburg to meet with the audience. After the screening of the new animated film “The Nose or the Conspiracy of Mavericks” (2020), a meeting was held with a production designer Varya Yakovleva.